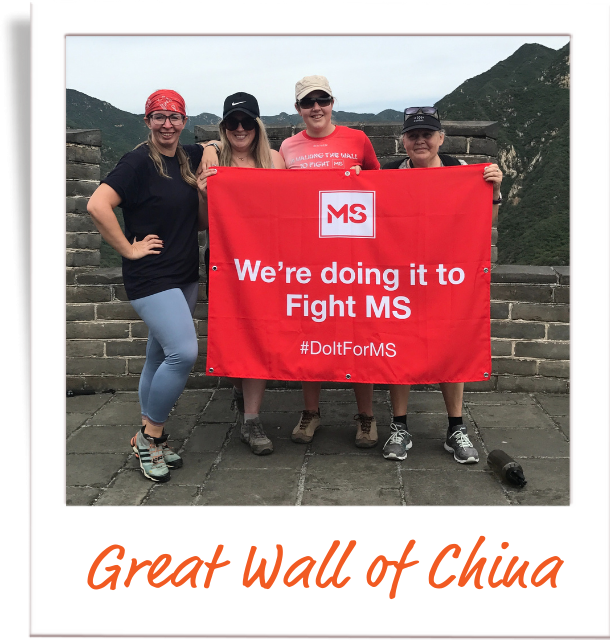 THE GREAT WALL OF CHINA,
FOUR STRANGERS AND ONE COMMON DENOMINATOR

What do you get when you bring four women together who all live with multiple sclerosis?

You’d be forgiven for thinking that the quartet could be going through a comparable journey, but the truth is that while they may share the same diagnosis, that’s about as far as the similarities go.

At the end of last year Sarah, Sair, Kelly and Kate found themselves (by chance) crossing paths as they embarked on MS’ newest expedition to China, Walk the Wall to Fight MS.

Heading to China, and each raising over $3,000 for MS, the four ladies thought that their biggest adventure was going to be making it to the top of one of the world’s greatest wonders. Little did they know that meeting one another would be just as pivotal.

“I think it was a bit of an emotional rollercoaster for me – especially meeting the three other girls who had multiple sclerosis, you know all fighting our own demons and pushing through that individually,” Kelly said.

For Kelly, living with multiple sclerosis affects her on a daily basis, and her symptoms are mostly invisible.

“I think because there is an assumption when you have an invisible illness that it isn’t as tough as it is. People are less flexible with you because they can’t actually see what’s happening and it takes a lot of reminding people and educating people that this is a little bit of a struggle for me and what that actually means in my day to day life,” Kelly admits.

“It’s quite a personal disease because I think it really affects your mental wellbeing. Everyone says if you look good you feel good, but when you don’t have that inner confidence because multiple sclerosis is chipping away at you, it makes you want to curl under the duvet and hide away.”

Experiencing constant numbness, Kelly jokes that she can easily walk in high heels without breaking a sweat, but it also means she can’t feel anything from her hips down.

“My main symptoms are that I’m numb in the lower part of my body. From my hips down, I’m numb which means that I’m often constipated, and I struggle to go to the bathroom.”

So, when Kelly met Sarah, Sair and Kate, she realised that she could finally talk about her condition with people who knew what she was on about.

“There’s no handbook for this disease, you just assume whatever you’re experiencing is in isolation, but when you’re talking to three others who are experiencing the same thing it makes you feel much better,” Kelly notes. 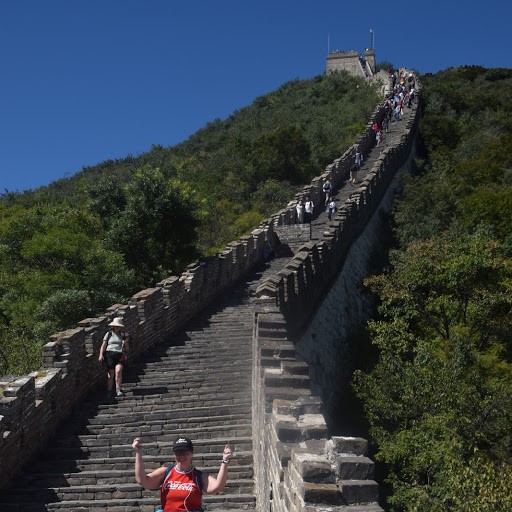 Kate (pictured left) agrees, saying that she felt like she could finally talk to people about her disease without being treated differently.

“It was nice to be able to chat to each other and joke about our symptoms or whatever – because usually no one else gets it.”

“I don’t look like I have multiple sclerosis. I think people find it uncomfortable when I tell them I have it. The reaction I get is kind of like, ‘oh you poor thing do you want my seat?’” Kate says.

Kate’s journey with multiple sclerosis really highlights the challenges that come with having symptoms that you can’t see, estimating that she was living with symptoms for over a year before she was formally diagnosed.

At the age of 26, Kate was experiencing complete numbness from her belly button down, and no one could tell her why.

“The doctor actually told me it was anxiety and then they told me I had a slipped disc, which it obviously wasn’t.”

“I did scans, and I followed it up, but no one could put a name on it. In retrospect it seems so weird to just leave it, but I just did because no one could tell me what was happening. It’s such a hard thing to explain – I remember I was getting waxed and I couldn’t feel anything. But I wasn’t in pain or anything – I was still driving, and I was still playing tennis, so I just went with it,” Kate says.

Going to China was a huge adventure for Kate, and she knew some of it might be challenging especially because her multiple sclerosis tends to play up in the hot weather.

“There were days I was tired. I don’t really like the heat so that kind of bothered me a bit. It was hard and there were bits that were challenging but we had such a good group of people so that helped a lot,” she says.

“The lasting friendships I made with the others is what I really loved.”

Similarly, when Sarah met the other three women who were living with the same condition as her, she says that she would sometimes just listen to them talking to each other.

“It was interesting to get some other input as to how they live, because it’s so hard to gauge how someone with multiple sclerosis is doing because everyone is affected by it in such different ways,” Sarah said.

When Sarah was diagnosed, she lost total vision in one of her eyes.

“I lost vision in one eye and I had numbness and tingling down one side of my body. My face just dropped on one side, my mum thought I’d had a stroke.”

After being formally diagnosed, Sarah says that she didn’t want to talk about having multiple sclerosis.

“I kind of distanced myself when I was diagnosed actually. I didn’t want to face it,” she says.

So, meeting other people with multiple sclerosis was something that Sarah hadn’t done much of before she got to China.

Out of all four women though, the expedition was the biggest for Sair because it was her first time overseas.

“My goal was to get my passport before I turned 50, and just as I did that, I came across the China trip, so it took me two seconds to sign up,” Sair says. 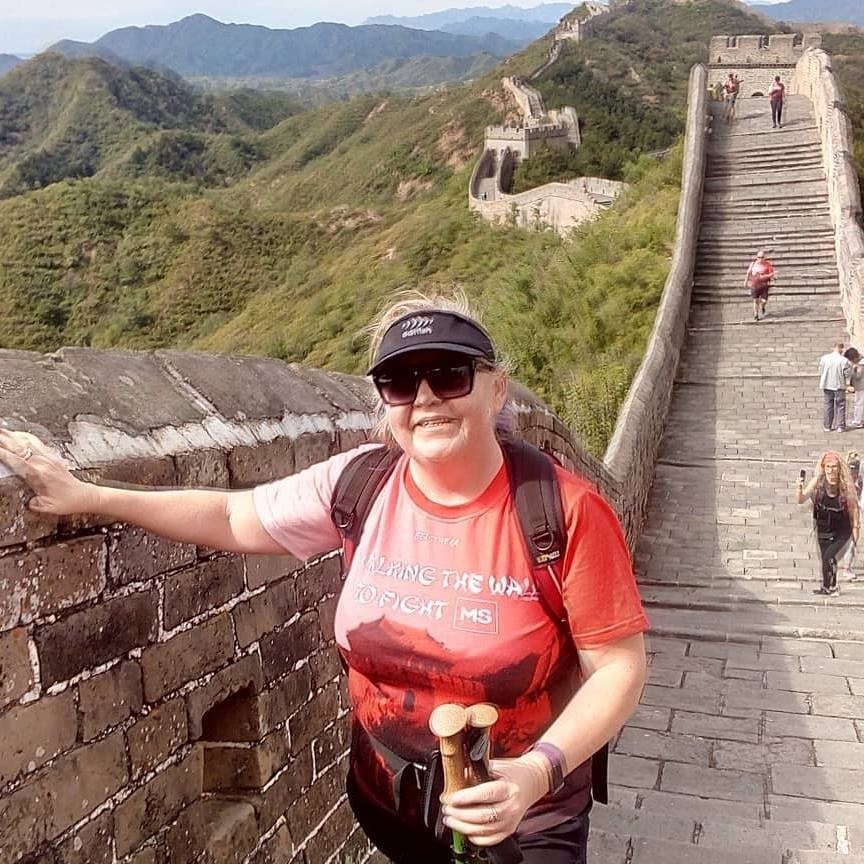 Sair’s (pictured right) experience with multiple sclerosis has been slightly different to the other three women, with her last big relapse causing her to lose her ability to speak.

“The last relapse I had was a shocker. I couldn’t speak, and I basically had to learn how to speak again,” she says.

We often say that no two journeys with multiple sclerosis are the same, and this couldn’t ring truer in this case.

“I didn’t think I could do something like China because my speech plays up and I can’t communicate well,” Sair admits.

“The first day was hard. I was overwhelmed because I couldn’t comprehend I was there. I cried and cried.”

But now that she’s completed The Great Wall of China, Sair has had a taste for adventure and she’s signed up for this year’s challenge, trekking The Larapinta Trail in June.

Sair knows that the way her multiple sclerosis has manifested itself means that her life has taken a very different path than she had planned, but she maintains that she won’t let it control her.

“I don’t give up. I won’t let multiple sclerosis beat me.”

Interested in going on your own expedition? MS holds annual challenge expeditions offering the adventure of a lifetime to various destinations, all while raising money for MS. Take a look at www.doitforms.org.au to learn more or to sign up. 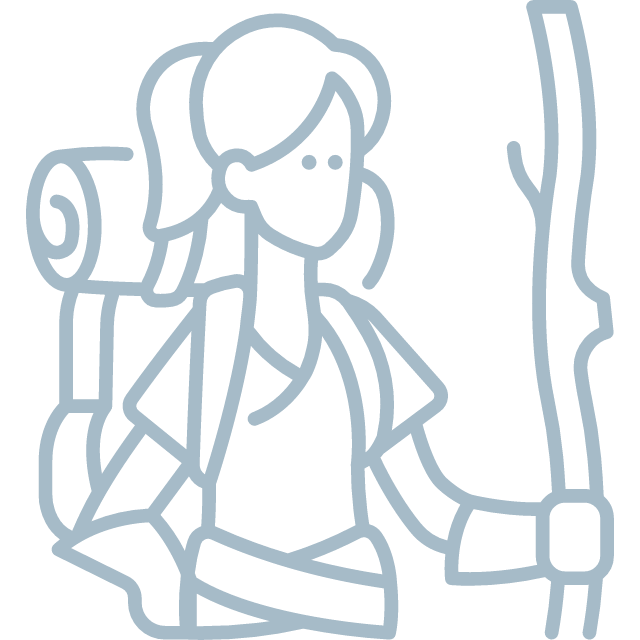