The future is bright for Christmas Lights For MS!

Ben Walker and James Crowther are no strangers to attracting attention. The pair have been building Christmas light displays at their family homes for the past 7 years. Not too bad considering both are just shy of eighteen! But this story really began two years ago, when Ben’s grandmother Lynn was diagnosed with multiple sclerosis. Ben and James reflect on how their fundraising started saying,

“Once we realised that we have created a following and people started to bring their families out for a visit, we decided we had a great platform that we could use to raise funds for a worthy cause. We had a conversation and decided to fundraise for MS.”

The pair decided to turn their escapades into annual fundraiser and Christmas lights for MS was born. In 2018 they grew the event to incorporate its own Facebook page with regular updates on how the displays were progressing and a raffle with prizes donated by local businesses. It’s no surprise why word of their displays spread across Canberra, James’ collection, which includes over 130 solar panels, is believed to be Canberra’s largest solar powered Christmas display. The pair were invited to share their story through an ABC radio interview and even got national coverage from a Nine news segment. The staggering light displays have garnered a lot of attention, but the highLIGHT for Ben and James was about making a difference in the community,

“We meet many people who are affected by MS and it really makes us feel good that we are helping people with multiple sclerosis.”

With help from family, friends and the community Ben and James have raised over $7000 for MS. It’s an incredible achievement and a real testament to the months of preparation Ben and James put into their displays each year. Ben and James have a simple approach to fundraising despite their complicated light displays. Both say,

“Just do it. Once you fill out the paperwork to get the Authority to Fundraise letter then the community really helps out and it’s a lot of fun. You get a sense of accomplishment and pride when you know you are making a difference.”

Find something that you are talented at and use those skills to start an event to raise funds.

Start your own Facebook page for the event, use this to raise awareness! 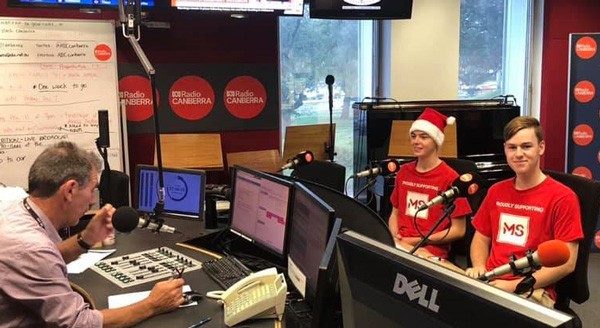