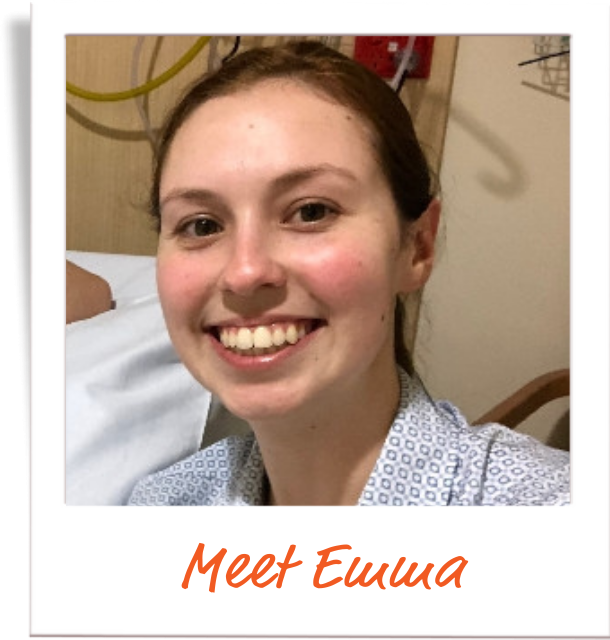 BE BRAVE AND SHAVE FOR MS 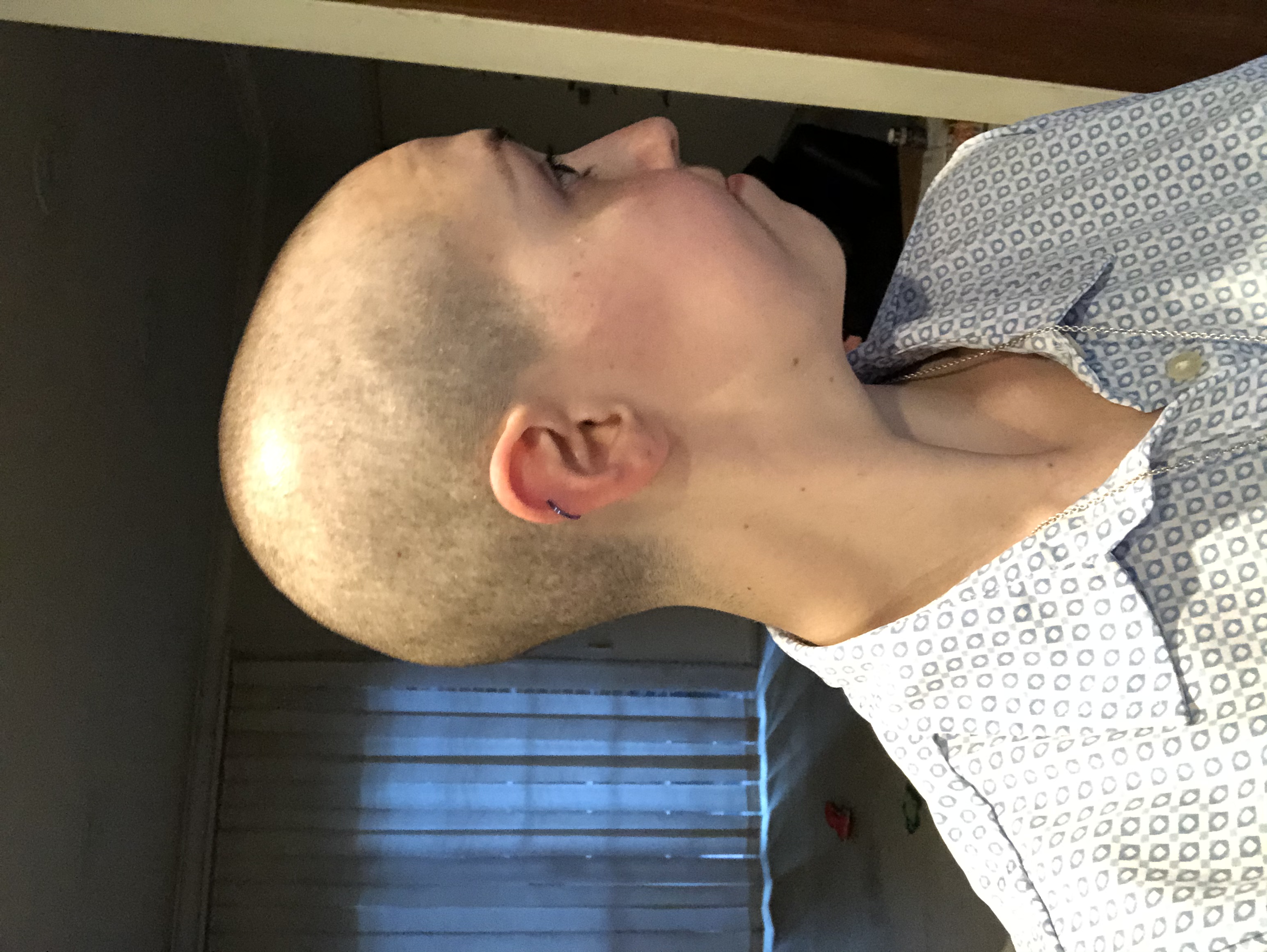 One night after work, 27-year-old Emma Burchett drove to her local hairdressers and asked for a number zero haircut. She sat back in the chair while the hairdresser started pinning back her hair in sections.

Emma anxiously waited and thought to herself, “Oh my gosh, if this woman asks me to confirm what I want one more time, I’m worried I’ll bail!” Thankfully, the hairdresser picked up the shaver and went straight in for the buzz. After that first buzz, Emma stared at the countertop until it was all gone. Too worried that she’d either pass out or cry if she watched all her hair fall to the ground.

When Emma stopped for petrol on the way home from her big shave, the cash register attendant pointed to his head and asked if she had shaved her head for summer. Once Emma confirmed it was for a fundraiser the attendant said, “I’m sure there’s a lot of people who would want to thank you.”

“It was so nice that I teared up on the walk back to my car. I felt very vulnerable, exposed and SO self-conscious, so his kind words really meant a lot.”

Emma was first introduced to MS in her childhood after her parents told her that her grandmother was living with MS. She wasn’t familiar with the exact particulars of the disease, just aware that it affected her grandmother’s balance. In 2017, Emma worked as a community nurse. One of her favourite clients also had MS, although a very different experience of symptoms, including the use of a wheelchair and suprapubic catheter. Emma’s third connection to MS occurred with the diagnosis of her dad in 2020. Given her father’s background of Type 2 Diabetes Mellitus, the family had been attributing his numb legs to diabetes before he was formally diagnosed with MS.

“It just goes to show that you could fill a room with people diagnosed with MS with a range of signs and symptoms so broad, that they can often have wildly different experiences of the same condition,” said Emma.

Her dad’s fatigue is now a big focus for herself and her mum. They both try to ensure that he balances his rest and activity and doesn’t overtax himself.

“He rests more frequently than he wants to, and I know he finds it frustrating at times to not be at his full steam,” said Emma.

Emma wanted to do something to show her support to her dad. This is when she had the idea to create a do it for MS fundraiser page, titled Be Brave and Shave for MS.

“I am not an active person by nature, so that ruled out anything to do with marathons or physical activity. I wanted to show Dad my support, and I thought that if plenty of people shave their head for cancer fundraisers, I could do that but for MS.”

Promoting her fundraising page was particularly difficult for Emma as shaving her head to raise funds for MS was going to be a surprise birthday present for her dad’s upcoming 57th birthday.

“I was worried that some of the less social-media-savvy mutual friends of ours may not know how to share a Facebook post purposely excluding someone’s feed,” said Emma.

She heavily relied on word of mouth and sticking flyers up around her workplace to promote her Be Brave and Shave for MS fundraiser. She also asked friends and family to spread the word when they could, ensuring that they kept it a secret from her dad. Emma did manage to sneak a careful social media post once or twice, but that was all she was willing to risk! 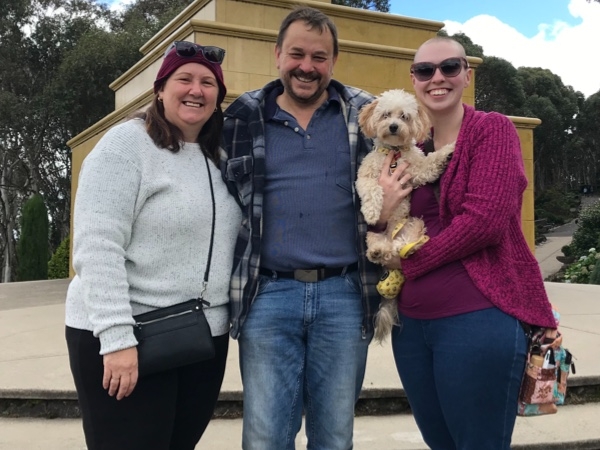 Two days post-shave, Emma travelled down to Victoria to visit her Mum and Dad. Her dad wasn’t expecting her until the next day, so he was already surprised when she walked out onto the deck to say hello.

“I kept my beanie on for the first couple of hours so we could just focus on settling in, and then before dinner when I asked if he wanted to see one of his birthday presents early, I took off my beanie and his face resembled the open-mouthed shocked emoji,” said Emma.

“My dad is a man of very few words, so we were all banking on that initial reaction, and it did not disappoint! I showed him the fundraising page and let him read through all the comments, which he was also very touched by.”

Emma had originally wanted to set the goal of $1570 for Dad’s 57th birthday but thought that was too high and she couldn’t even imagine getting anywhere near that number for a head shave. She lowered her target to $570, finalising her fundraising page and went to bed.

The next day she woke and checked her emails to find that her generous friends from overseas had donated and she had already surpassed her initial goal.

“That blew me away and my first and only thoughts were that either they hadn’t meant to put the 0 at the end or maybe the US to AUD conversion had thrown them off?? I immediately sent them off a thank you email largely spent in caps lock and extended the fundraiser goal,” said Emma.

“I was so touched, and sometimes you just don’t know how to adequately express yourself because ‘thank you’ seems so insufficient for the depth you want to convey. To everyone who donated, whether it was $500 or $5, I very heartily want to say thank you, and every token of support meant a lot to me.”

When asked what your top fundraising tip is for others do it for MS fundraisers, Emma says “Find a fundraising activity that is in your comfort zone, and then badger everyone who loves you to help you spread the word! It also helps if the HTML link is easy to recall off the top of your head!”

Find a fundraising activity that is in your comfort zone, and then badger everyone who loves you to help you spread the word!

Create a fundraising link that is easy to recall off the top of your head.